Skip to the conclusion if you are lazy and don’t want to learn, when you encounter [X] it means sources are available at the bottom of the page.

Hungover is thought to have 4 main causes : Acetaldehyde, Glutamate rebound, electrolyte depletion and Congeners, this is still subject to debate, noone really knows but it is widely accepted that dealing with those 3 problems greatly reduce hungover.

Once it enters your body alcohol (Ethanol) is being metabolized, metabolisation is a process which will break down ethanol in other stuff, then those stuff too untill nothing remains.

Acetaldehyde is a highly unstable compound and quickly forms free radical structures which are highly toxic, Its is 30x more damaging than ethanol to the liver [1] and is thought to have a big part in hungover. your body attempts to break it down with the enzymes acetaldehyde dehydrogenase and glutathione, a powerful antioxidant that is crucial for liver detoxification

Many scientists now believe that acetaldehyde is one of the main causes of hangovers. Evidence of this can be seen by the effects of the anti-alcoholism drug Antabuse, which prevents the liver from breaking down acetaldehyde and causes levels of it to buildup quickly. When Antabuse is taken, acetaldehyde levels grew so quickly that acetaldehyde toxicity set in shortly after the first drink causing immediate hangover symptoms such as severe headaches and vomiting. The rationale behind the use of Antabuse is that the immediate hangover symptoms would be so severe that even alcoholics would be wary of having another drink for fear of making the negative side effects even worse.

So what do we do? we kill the acetaldehyde!

You won’t have enough glutathione if you are getting drunk. Glutathione can’t be taken orally (it doesn’t absorb well) However, taking a glutathione precursor by mouth (which your body turns into glutathione) can be easily done, and it’s NAC (N-acetylcisteine, sometimes called acetylcisteine, they are both the same molecule), which is absorbed really well.
NAC is a non essential amino acid, non essential means that your body produce it on it’s own, but in this case it won’t have enought of it.
Other antioxidant are known to help, such as vitamin C and B1 (thyamine), see : 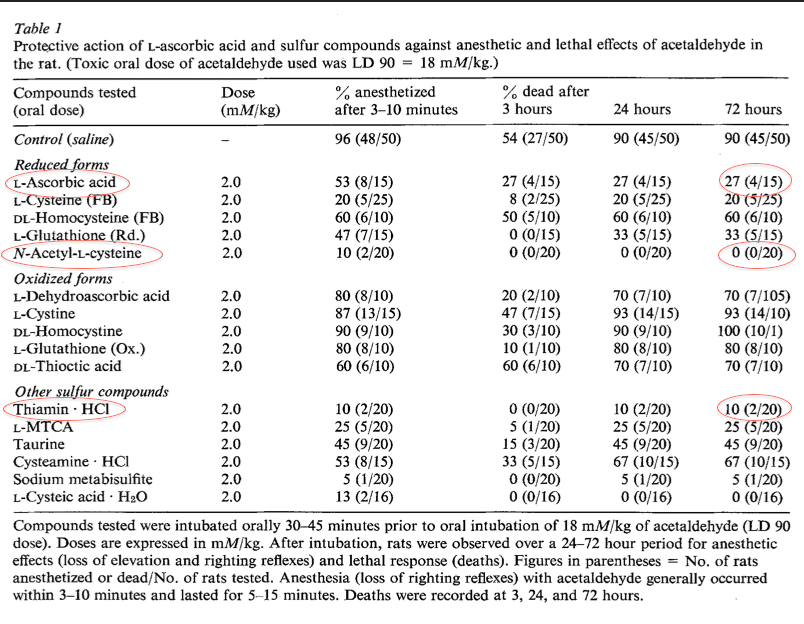 As you can see in this study, rats were administered with Acetaldehyde and then were injected various stuff, what is interesting here is L-Ascorbic acid (vitamin C), NAC and Thiamin (vitamin B1).
They were no death when NAC was taken, only 4 death when vitamin-C was taken and only 2 death when vitamin B1 was taken (against 45 death for when nothing was taken)

they also found that if they combined those three, they could use half as much vitamin C and just a small amount of thiamine. It’s because vitamin C increase production of . Glutathione[3] and Thiamine deficiency causes a lot of bad effects (alcohol processing will deplete you thiamine stocks), Thiamine deficiency—rather than the toxic effects of ethanol—has been proposed as the primary cause of cerebellar degeneration in alcoholics[2].

However be careful, NAC was administered BEFORE drinking, and as this study suggest [4], taking NAC after drinking apparently harms the liver
This study also show that liver damage are being reduced when taking NAC before, not just hungover.

These are mice/rats study mice but in this case NAC, vitamin C and thiamine have been thoroughly tested in humans, both IV and orally, and their antioxidant and liver-protective effects are well established
Taking a NAC, Thiamyne and Vit-C cocktail will preserve your liver and remove one part of hungover.

There are a few toxicological studies of NAC available and the following observations can be made. NAC in normal food supplementation ranges is without known toxicity and has been administered by physicians under supervision in doses of 500 milligrams to four grams daily. Daily levels of 1,000 milligrams of NAC per kilogram in rats for several months did not produce adverse effects in behavior, weight gain, hematology, liver function and kidney function. [00] (That’s the equivalent of 60 grams of NAC per day for a 132 pound person, 80 grams per day for a 176 pound person, or 100 grams per day for a 220 pound person.)

When you drink, alcohol has a depressive effect on your system and blocks the production of one of your body’s natural stimulants, Glutamate.

Due to the blocking and destruction of Glutamate, when you are done drinking your body goes into overdrive and produces more Glutamate than your body needs.

This high production of Glutamate is what prevents the drinker to be able to achieve deep, restful sleep, and is why a lot of people wake up super early after a night of binging.

TL;DR : drinking a lot cause a glutamate rebound that will make you feel bad the next day. (personally I do feel anxious and sad after a night of binge drinking for the whole next day)

Dihydromyricetin (DHM) is a natural extract of the Oriental Raisin Tree, a lot of store will advertise that.
However fuck the “natural” word, natural does not mean anything, want some natural uranium? Some natural ebola? some natural petrol? Nah? Didn’t think so!

Though less significant than acetaldehyde toxicity, another contributing cause of hangovers is a rebound in the levels of the neurotransmitters GABA and Glutamate, When alcohol reaches the brain it affects how the brain responds to the neurotransmitters GABA and Glutamate. GABA is an inhibitory neurotransmitter, meaning higher levels of it cause a sedating effect. Alcohol causes the brain to act as if higher levels of GABA are present, which causes relaxation, lowered inhibitions, and the slurred words and loss of motor control that are classic symptoms of drunkenness.

Glutamate is an excitatory neurotransmitter, meaning higher levels cause brain activity, heart rate, and energy levels to rise. Alcohol has the opposite effect on Glutamate than it does on GABA, causing the brain to act as if there is less Glutamate present. This, combined with it’s effect on GABA produce it’s sedative effects.

While you’re drinking, the brain attempts to compensate for the effects of alcohol by releasing less GABA and more Glutamate. This rebound effect is why it is so easy to fall asleep when drunk, but why sleep quality is decreased and you’ll often wake up tired after only 5 or 6 hours of sleep.

This is the same process that occurs when a longtime alcoholic withdraws from alcohol, the difference being that months of daily drinking provides more time for the brain to compensate for the effects of alcohol making the rebound that occurs when quitting far more severe.

This is another hangover cause addressed by Dihydromyricetin, as it blocks alcohol’s ability to influence GABA. When DHM is taken after a long night of drinking, it binds to GABA receptors, preventing alcohol from influencing them. This reduces the rebound effect from GABA that occurs, and in turn limits the negative symptoms caused by it. So potent is this effect, that researchers believe DHM may have promise as a treatment for the more severe alcohol withdrawal suffered by alcoholics attempting to kick the habit.

Because DHM reduces the effect alcohol has on GABA, it can also be taken at the beginning of the night by those who don’t want to become intoxicated, but find themselves in social situations where drinking is expected. (Such as a skilled poker player who wants to exploit the drunkenness of other players at cash games.) When used this way, the recommended dosage is two 300 mg capsules taken before drinking for every three drinks that are expected to be consumed

If you want to still be drunk and skip hungover take DHM only when you are done drinking.

Alcohol causes the body to flush all is fluids by urinating (you urinate much more than if you were drinking the same volume of water)
In our bodies, electrolytes include sodium (Na+), potassium (K+), calcium (Ca2+), bicarbonate (HCO3-, magnesium (Mg2+), chloride (C1-), hydrogen phosphate (HPO42-), and hydrogen carbonate (HCO3-).

They must be replenished, I personally do nothing about it, NAC/vitC/thiamine + DHM is ok for me.

Congeners are small amounts of chemical byproducts of fermentation such as acetone, acetaldehyde and tannins. They are much more prevalent in some alcoholic drinks than others. In general, the darker-colored alcohols have more congeners: bourbon, brandy, whiskey, tequila and red wine are the heavy hitters. Clear alcohols like vodka, rum, gin and white wine have fewer congeners.

The only solution I known : drink low congener alcochol

As said in the theory, if you did not took your NAC BEFORE drinking, then you are only allowed to do step 3 which is DHM before sleeping.

DISCLAIMER :
Any supplements and information I listed here are just my opinions and in no way am I a doctor. They all are safe but take them at your own risk.

Woke up at 8h00 (phone alarm) in a pretty bad state but better than usual, 10 minute after waking my condition GREATLY improved and I was feeling almost fresh (can’t expect to feel ultra-good when you sleep only 5h).
I’m slightly emotionaly altered but it’s nowhere near what I usually feel (usually extreme sadness for up to 12h)
I’ll only used NAC.

NAC is not suposed to act on alcohol effects but I was less drunk than usual, on the other hand there was a new barman and it’s drinks were less loaded.

Result are better than expected, needs to be done again for reproducibility purposes.